It’s payday! I meant to make a bad title worse by buying expensive ingredients and then calling this ‘payday pie day Friday’, but you are all spared as I saw a cauliflower for only 60p while I was mooching through the market.

If you read yesterday’s entry you will know that I bought rather a lot of onions on Wednesday. 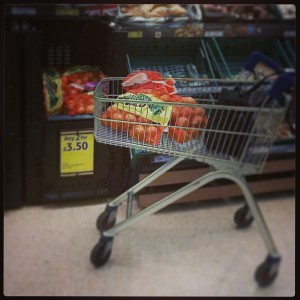 I’m planning on making something like relish with some of them, but I’ve also been looking at onion pie recipes. I was taken with a suggestion from easy as vegan pie to caramelise onions and blend some into a sauce, although the layering described in the recipe sounded a bit faffy.

I sliced and started cooking 5 onions with a pinch of smoked salt, but forgot to add sugar – 20 minutes later they were still pale, but they had a great flavour.

I made a standard short crust pastry case. 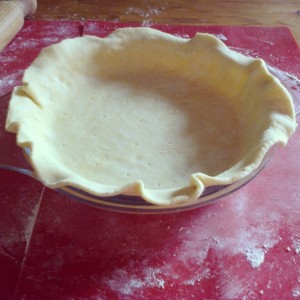 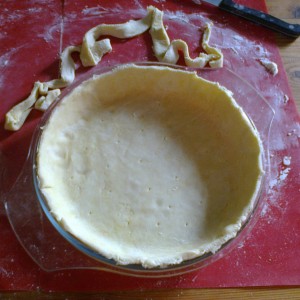 Kinda wish I’d left it with a ripple!

I cut the cauliflower into what I hoped were bite-sized pieces, and fried them in a drizzle of oil with some of the onions. I made a sauce by blending 200g tofu, 2 cloves garlic, most of the remaining fried onions, a couple of teaspoons each of English mustard and bouillon powder and (a mistake!) 2/3 of a dried chipotle, which made it too spicy. I was gilding the lily by adding that as well as mustard. I also added soyamilk and about 3 tablespoons cornflour, as I didn’t want it as firm as last week’s custard, but in fact it could have stood a bit more.

The pie went in a hot oven for about fifteen minute, with a sprinkling of smoked paprika and a few squirts of one-cal sunflower oil spray. 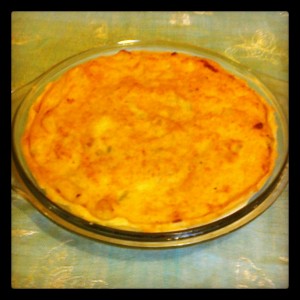 It tasted pretty good, although definitely too chipotle-y, and went pretty well with some of the rhubarb and apple chutney made earlier this year. I have a feeling the flavours will mellow and become tastier once it cools.