Maybe it helps that I’ve got hayfever at the moment so I’m not tasting things as much as I could be, but I don’t think the 20p-for-40-teabags tea is as bad as people have been making out! It’s certainly a huge improvement on having to go through caffeine withdrawal! I had four cups this morning.

Having said I’m not a breakfast person, I woke up peckish so I had 25g dry cornflakes in the privacy of my own home.

I ate the 6 snack crackers I took to work throughout the morning along with my cups of tea, then went into town on the never-ending quest for affordable potatoes. Nothing doing in Leicester Market, they had 1kg potatoes for £1.10 (I’ve got £1.17 left from the fiver, I could spend it all on potatoes, but I was hoping to get something else for flavouring as well, like a bulb of garlic), or some people were selling bowlfuls for £1 but lesser quantities did not seem to be on offer. Marks & Spencer didn’t have any for less than £1.75 a kilo. There’s an ‘International Supermarket’ (smallish grocery shop selling some fresh produce) on Granby Street, and they had 2 kilo bags of potatoes for £1, but they were outside in the full sun in an orange-toned plastic bag and I didn’t trust them not to be green once the bag was opened.

Empty handed I started for home, but on my walk back I saw some cleavers peeking through a hedge on New Walk so I gathered a small handful of those, they’re supposed to be a good spring tonic.

When I got home I made a very simple bannock from 100g self-raising flour, a pinch of salt and enough water to make a soft dough, rolled out a bit into a circle and baked in a hot oven until it had puffed up and just picked up a tinge of brown on top. I ate half of this with soup made from 150g split peas, 15g tomato purée, 25g chopped carrot, the cleavers and 2 dandelion leaves finely chopped, salt, and water to cover, simmered until the carrot was tender. I topped this with a couple of spoonfuls of the cabbage cooked with pickled onions that I made last night.

The soup was… functional? It wasn’t bad, and the dandelions stopped it from tasting too boring by making it very slightly bitter, but it would have benefited from some spices and a squirt of lemon.

The other half of the bannock I had as a sandwich with 50g coleslaw and 5g mustard. This was good, I will make something similar again. 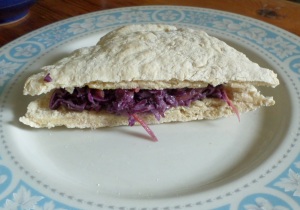 I calculate I’ve had around 885 calories and 32g protein so far, which isn’t too shabby. I’m about to take a walk to Morrisons now to see what I can come up with for that final £1.17.