I hang out on the Post Punk Kitchen discussion forum and from time to time spammers chance their luck, as happens with all forums. The mods are great at deleting things pretty quickly, but I sometimes click through because they are occasionally hilarious.

This morning a spammer posted two “recipes” with some extremely weird ingredients, instructions that made no sense BUT one post (entitled “potato latkes”) was accompanied by a picture that made me want gussied-up fried potatoes – it was what looked like mashed potatoes and very finely diced spring-onions or green peppers bound by a ring of onion. The other post was entitled “delicious potatoes” and was clearly a picture of latkes, so I choose to think the picture illustrating latkes was actually the one that was supposed to go with the “delicious potatoes” recipe. I didn’t have spring onions or peppers, but here’s my interpretation anyway… 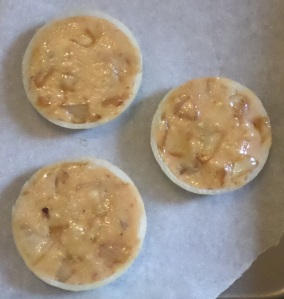 Delicious potatoes as part of a delicious brunch

How I made the delicious potatoes:

olive oil for frying and basting

Method: Take the two middle (fat) slices of onion and separate the outer rings. I used 6 rings, but you might want to use 7 or 8 instead and underfill them a little bit, because the filling stays the same size and the onion rings shrink when they’re heated, as you can see from the second picture above.

Chop up the rest of the onion and fry it on a low-medium heat in a splash of olive oil with the soya sauce and balsamic vinegar until browned and caramelised, about 12-15 minutes.

Add the onion into the mashed potato, stir in the rest of the ingredients, pack the resulting mix firmly into the onion rings and either brush with oil and bake in a medium-hot oven around 200 degrees F for 12-15 minutes or fry for 5-6 minutes on each side in a pan. I tried both, and they both taste good, I think presentation-wise the fried ones look a bit more appetising but there’s not much in it.

I wasn’t just going to eat 6 delicious potato cakes on their own (although I probably could!) so I cooked up some fancy baked beans (by fancy I just mean I spooned some from a tin and added a few peas, tomatoes, slices of garlic and chopped fresh coriander), Fry’s frankfurter-style sausages and a few fried mushrooms. Very pleasant brunch indeed!

I kinda made up the recipe, but basically it’s 225g bread flour, 1/4 pint warm water, about a tsp instant yeast, 1/2 tsp salt, knead it all together and leave it to rise for an hour somewhere warmish. Roll it out into a rectangle. Heat about 1 tablespoon coconut oil in a little saucepan until it’s melted, then cool it down by adding about another tablespoon of oil (I used rapeseed), add in a couple of tablespoons sugar (I used soft brown) and a teaspoon of cinnamon and maybe quarter-half a teaspoon of allspice. Spread the cinnamon mix onto the rectangle, roll it up and slice it into 8 pieces, arrange them in a baking dish and leave them to rise for another 40 mins, then bake them in an oven at about 180c/350f degrees for 15-20 mins. The glaze was just a bit of icing sugar and a couple of spoonfuls of soya milk and the zest of an orange, but you could use the juice instead of milk if you wanted it really zingy, or leave the zest out if you just want the cinnamon to shine through. It actually could have stood a bit more cinnamon but that was the last of the jar and it had been open a while so your mileage may vary.