So, how did I enjoy my first day of unfettered spending in two months, I hear you ask? Well, I liked it very much!

The day began with a final weigh-in for the 20lb challenge I’ve been taking part in, and I was relieved to see I was still okay, and will not have to pay £100 forfeit.

I also received a lovely surprise Advent House from B yesterday, and he brought it over this morning. Apologies for the terrible picture quality, but hopefully you can still make out how cute this is!

Perhaps you can see a hint of gold on the left? It’s a chocolate egg filled with fondant that wouldn’t fit in the day 1 cubbyhole!

Then we headed off to Oadby for some grocery shopping. I had earmarked some chocolate-hazelnut spread in Asda as a potential post-challenge treat on my previous visit, so we headed there first. I picked up some mushrooms and peppers (more expensive veg by weight so I haven’t bought in a while, apart from the bargain bowl of peppers from the market) and then made a beeline for the allergy section and popped a jar of spread in my basket. Then I put it back on the shelf. I do still have chocolate-christmas-pudding-with-nuts to eat and actually the thought of eating that spread just didn’t appeal for some reason after all.

After Asda we went to Waitrose, where as luck would have it they were reducing the price on loads of lovely veg! I got organic potatoes, carrots, a big coriander plant, broccoli and ginger, as well as some baked beans and a loaf of bread, spending just over ten pounds in total. I also picked up a membership card and got given a free newspaper as I’d spent over five pounds. The membership cards will also get you free coffee in their coffee shops, so it’s worth getting one if you have a store nearby.

Then we went to Shivalli (South Indian vegetarian restaurant) for the Sunday buffet and I got my deep fried food! I was hoping they would have the spicy gram-flour coated chips they sometimes make, but it was not to be, however the lentil doughnuts, battered aubergines, dosas and puris, with chickpea, potato and spinach curries were all excellent, though we found we couldn’t cram as much in as we used to be able to pre-diet.

We went back to B’s to decorate his Christmas tree, then had a quick look round the Queens Road Christmas Fair, which seemed to be buzzing. I came home and made vegetables in a nutty, garlicky sauce and mustard mashed potatoes for dinner, and am now comfortably full.

People commented yesterday that they’d be interested in a round-up from my challenges, and any tips. I’m not sure I have anything really to add to what I’ve mentioned going along, though. Although it’s not always been enjoyable it’s been useful to limit my spending like this to force me to use up my cupboards, limit food waste and make me appreciate and get creative with what I have. This isn’t the first spending challenge I’ve undertaken (I went over the limit with the first one as the timing was terrible! It was during a month I was at the Edinburgh Festival), but it’s been the most necessary one in terms of my finances, and I think that gave me extra motivation, and committing myself to blogging regularly helped too, because if there was something a bit extravagant in the shops the thought of having to justify the purchase in writing was an excellent check!

Edited to add: one thing I didn’t mention explicitly before, although it’s probably obvious from the first picture for each month, is that I withdrew all the money for the month at the beginning. I put most of it in a wallet which I wrote the name of the challenge on, and tried to keep fairly close to the daily maximum spend in my everyday wallet. I found this helpful as I didn’t have to keep going to the bank or using my debit card, both of which might have tempted me to get out and spend more money.

Had quite a nice morning at work, particularly as I’d said I would help someone with some poster art and they seemed very pleased with what I produced. There’s always a bit more of a relaxed feel to Fridays as well.

I was worried it would chuck down with rain just after leaving work, but apart from a few spots of rain the sky just decided to brood.

I had finished the whole pack of crispbreads I bought yesterday by the middle of this morning, so popped over to Currant Affairs to get another. Hopefully this one will see me through until Sunday. After leaving the shop I cut through to St Martin’s Square, passing some unusual foliage in planters by the outside seating area of Mrs Bridges Tearooms. My phone-cam doesn’t really do them justice but they were such a bright lilac I wondered if they’d been sprayed! Closer inspection seemed to prove the colour natural though, and it wasn’t from flowers, it’s the colour of the leaves themselves. Anyone know what they are? 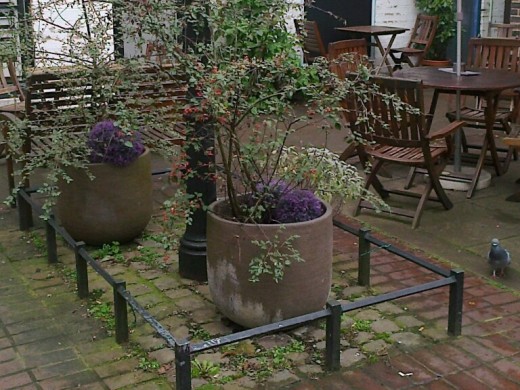 That’s £1.20 spent today, and I’m probably going to leave it at that, it’s too cold and windy to walk anywhere this afternoon. Instead I’m huddled up reading free e-books from Project Gutenberg. The Leicester libraries service recently launched free e-magazines and I haven’t really checked them out properly yet, so I might take a gander at those later.

I get paid once a month, and today is payday. Usually I buy myself something small as a payday treat. Maybe have lunch out, or buy something small but not entirely necessary. But not today. It’s very unusual to look at the calendar and realise it’s payday and have that make no particular difference to the day (though actually I did then go and check it’d gone in at the bank, so I suppose it did affect my day a bit after all!).

I’m in the UK, so obviously I’m not celebrating Thanksgiving, but since so many people I intereact with online are in the USA or Canada (who I believe had their Thanksgiving about five weeks ago?) I’ve been thinking about the things I have to be thankful for. These challenges have been super helpful for making me appreciate having enough. I may not be rich, but I still have the opportunity and ability to work for pay, I have friends and parents who would help me out if I were really in need, I live in a city where there’s quite a lot of stuff going on that it’s possible to participate in even on a slim-to-none budget. I’m thankful that I’ve been able to eat a relatively healthy diet even on a budget, in great part because of other people’s generosity with their autumn harvests, as well as the good amount of choice available at the market, local supermarkets and greengrocers all within walking distance.

I’m also very relieved that my scales have swung the other way this morning. If I don’t weigh in at 20lb lighter on Sunday than I was on 9th June, I have to pay £100 forfeit as part of a weight-loss challenge. I was bang on target until a few days ago, then suddenly put on 3 lb with less than a week to go. Thankfully it was just a temporary blip and I was back on target this morning, but I’m not taking any chances, it’s all tofu, rye crispbreads and tinned tomatoes (livened up with dried herbs and other low-fat condiments) until Sunday. Okay, well I did have a tiny morsel of Christmas pudding in some porridge this morning, but just a mere hint to give it some interest!

Tired today. My neighbours have a malfunctioning burglar alarm that has been erupting into unpredictable whoop-whoops for the past few days (and nights), sometimes every half hour or so. I do have earplugs, but they don’t completely cut the sound out, and the noise makes me jump sometimes because it’s so random.

As well as being near the end of the November ninety challenge, I’m also on the final stretch of the 20lb weight loss challenge I started with B back in June. I was at the goal weight and then suddenly put on 3lb for no apparent reason, so I went out and bought Ryvitas and fruit for brunch today to help with the final kick. £2.52 spent on those to bring the month’s spend to £72.50 (target for day 26 is up to £78). Four more days! I am going to celebrate December 1st with fried potatoes!

Dinner tonight was pea soup. The value frozen peas I bought a while back have lasted well, mainly because they’re not as nice as the regular peas I usually get. Another lesson learned. It’s not a very good saving if you’re reluctant to eat the product instead of deriving pleasure from eating it!

The £100 challenge for October

Every now and then I like to make life more interesting by setting myself a budget challenge.

I’ve done these before, so I know that it’s possible, but also that it’s surprisingly hard. Lucky me that I have some choice though, I do realise that. Now that I work part time at my main job, my basic salary only barely covers my bills, and the extra work I get offered is what pays for food and fun, but I’ve been fortunate enough so far to keep getting that work.

The £100 challenge for the month of October means that I set a limit of that amount of spending money. This includes:

It does not include bills which come out via direct debit, e.g. phone and internet, heating and property-related expenses.

At the moment I am supposedly trying to lose weight for a 20lb challenge (everything is easier if you make it into a challenge!), which I totally slacked off of while Vegan MoFo was on, so that’s good in a way, should mean I spend less on food, although salad stuff can be expensive… and I now have a ton of food in the freezer, all those onions, and my boyfriend’s parents sent me a carrier bag full of apples from their tree. Really, I could probably get by not spending much on food at all, but I really like trying new things and buying bargains, so it’s a huge temptation for me.

Tomorrow I’m going to do a cupboard inventory. I’ll be keeping track of my daily spends on here and hopefully posting some frugal and/or low-calorie recipes.

Some friends I mentioned this to are interested in joining. If you are too, please leave me a comment. Misery loves company! 😉