Yesterday evening I went on a supermarket run to get potatoes. They were out of the ones I wanted, but instead I left with 10 kilos of onions (they were on special offer! 2 five kilo bags for only £3.50, how could I refuse??), 3 litres of organic cider (also on offer) and a punnet of aronia berries, marked down at the end of the day from £2 to 20p.

I have never, to my knowledge, eaten an aronia berry before. These were grown in Scotland, so no worries about air miles, but for an unusual ingredient they were sparse on recipe suggestions on the pack, just telling me they work well cooked. So, completely ignoring that, I ate a couple raw. They were a bit weird, I have to say. They have a definite ‘hedgerow’ flavour eaten out of hand. I thought I’d bung some in a milkshake to use them up.

I used around half of the 250g punnet, and to thicken and sweeten it a bit I added 6 dried apricots. Because I forgot to refill the ice-cube tray I used a few chunks of frozen rhubarb, and blended it all up with 3/4 pint or so of unsweetened soya milk. 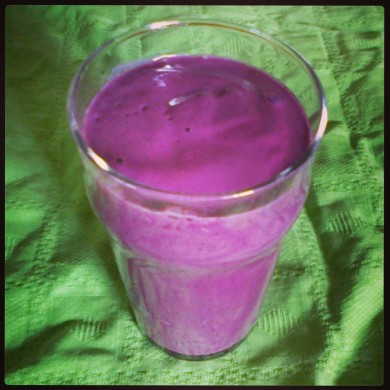 On first taste the flavour of the berries came through in a rather bitter way, and I thought I’d just wasted a load of ingredients, but I’m glad I gave it a second sip, because once you get used to it it’s fine, rather pleasant in fact.

Aronia are alternatively known as chokeberries because of their astringent qualities, and they do produce a slightly unusual sensation of dryness in the mouth, but it’s bearable, and after a while the taste is reminiscent of black cherries.

Apparently, aronia are sometimes found in ornamental planting schemes on municipal land. I don’t think I would buy these at full price, but now I know what they look like I’ll be keeping my eye on the hedgerows!

Possibly due to the changing of the seasons a large number of people where I work seem to have come down with cold or sore throat type ailments. Sadly, I am included in the crowd of malady sufferers, though infuriatingly it’s not been bad enough for me to be able to take a sick day, rather I have a low-level sore throat and sniffle going on, and sneeze now and then for good measure.

Whenever illness strikes I, like many others, take comfort in a warm cupful of something. My daytime choice is a cup of hot water with a teaspoon of Marigold bouillon powder (I’ve mentioned this stuff before, because I have a massive tub of it. I’ve been known to enjoy Kallo brand as well, although it’s irritating that not all of their tubs are vegan.) and about half a teaspoon of dried ginger powder.

Because I have the humungous container of powder I’ve been able to transfer a few spoonfuls to a little jar to add to my stash at work. Not pictured: the remains of 100g bag of ginger I’m still trying to make progress on before its use-by at the end of next month.

Second in my line-up of soothing mugstuffs is a simple, comforting drink made from apple juice, hot water and cinnamon. It’s nice and easy, perfect if you’re not feeling too hot as it requires half a mugful of boiling water to be poured over a heaped teaspoon of powdered cinnamon, then the mug topped up with apple juice and a good stir with a teaspoon. I can’t think of a more comforting drink, with the possible exception of my final suggestion.

Last on the list, for when feeling ghastly and in need of a soothing cheer – make up a packet of vegetarian jelly crystals, strawberry for preference, with the requisite pint of water. Then fill a mug or bowl with some of the mixture, get a soup spoon and start dipping it out in spoonfuls and just wait for it to start setting in the spoon. As soon as a jiggly skin starts to form, down the hatch! It’ll still be a bit warm, and brilliantly comforting to a sore or scratchy throat.

If none of these suggestions tickles your fancy (perhaps you are feeling particularly fit and well at the moment. Good for you!)  I leave you with a picture of something I saw in a skip earlier today…

They say Thursday is the new Friday. Is that because you already feel like you’ve done a whole week’s work by the end of the day? After a morning at my regular job, followed by a walk to and from a casual afternoon of work involving 3 hours of traipsing round a library trying to find books to send off to other libraries, I got home in need of nourishing refreshment but with a juice-less refrigerator and no inclination to cook straight away.

Enter the smoothie. In keeping with the frugal theme I am incorporating produce I got for free. There’s one of the apples from earlier in the week, and some rhubarb I picked from my garden earlier in the summer and froze. This does double duty, cooling the drink and adding zing!

6g brown flax seeds (brown are cheaper than golden, for no reason I can fathom)

6g sliced root ginger (this does make it quite gingery, you might want to try 3g and take it from there)

25g apple, quartered and cored – a bit more would have been good, I think

about 350ml water (basically, to make it up to around an imperial pint for the drink in total – 20 fluid ounces, as opposed to 16 fluid ounces in a US pint, if wikipedia is not leading me astray).

Method: blend it until it’s smooth. Pour into glass. Drink!

You may be wondering why I didn’t use one of the bananas I picked up from the market earlier this week. The reason is that I don’t think bananas play very well with rhubarb. Apricots fulfil many of the same functions of sweetening and thickening a smoothie, and they’re a reasonable source of iron, fibre and other good stuff.

(I nearly called this post ‘Hello, boozy Tuesday’, but I thought that might be a bit obscure).

Although I haven’t seen any yet on my travels, I’m sure there must be some sloes around getting ripe and ready to be picked soon. Sometimes I know there are goodies to be had if I go and look for them but it seems a bit of hassle, so it’s good to have a token of what can be expected once the effort has been made.

Now, this may be a bit cheaty, but I didn’t actually make any of the home-made ingredients in the following beverage (unless you count the ice!), the gin was given to me last Christmas by my good friend Emma, and the jam made by my mum (she grew the fruit for it as well)

Equipment needed – blender. I have a Vitamix, which I couldn’t really afford, but it’s been really, REALLY handy since I bought it, I use it many times a week, and it just pulverises stuff. I’m sure you could make this in a less powerful blender but you might have to add more liquid to less ice.

Some sloe gin, to taste. Start with about 2 1/2 tablespoons and take it from there.

Stick everything in a blender, turn blender on to high power, use the tamper if you have a Vitamix to shove everything towards the blades. When blended to your liking, pour/shake (it’s kind of sorbet consistency unless you’ve blended it so long the mix has started to heat up a bit and melt) into a glass and enjoy!