About a week ago Rebecca of The Domestic Storyteller said she’d be interested in seeing what cheap meals I come up with. This post may explain why I haven’t been that forthcoming!

This is what I ate for lunch today. 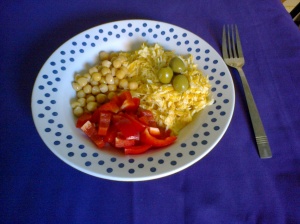 It was a pile of the pumpkin and cabbage coleslaw I made last night (dressing: a few cashews, a few chickpeas, couple of spoonfuls sesame seeds, a few green olives, a sliver of raw onion and a clove of garlic, juice of half a lemon, glugs of balsamic and cider vinegar and olive oil, thinned with water and blended. And a kitchen sink for good measure!) a couple of handfuls cooked chickpeas seasoned with herbamare and half a sliced-up red pepper, plus a few pimento-stuffed olives, my budget garnish of choice at the moment. It did the job, but it’s hardly thrilling. I reckon it cost under 50p though, even including cooking costs for the chickpeas.

Other meals have mostly been unfortunately glorpy-looking stews and curries that nobody needs to see. I suppose I should be making more of an effort, but it’s taking enough effort to just get through this. Picking one month to go teetotal, live on the most restrictive budget I’ve had in twenty years and start trying to lose weight again strangely hasn’t put me in the mood to get creative in the kitchen.

Having said that, I still have a huge unopened bag of caraway seeds that need eating. Anyone got any budget-friendly suggestions?

Another day at two different workplaces and I ran out of inspiration and enthusiasm when trying to come up with a packed lunch from the contents of the cupboards, fridge or freezer, so I turned from the frugal path and bought my lunch in town. The shame!

How could I pass up the opportunity for getting a mushroom and tofu pasty though, if it’s today only?! (although I am slightly suspicious about why they would only have them on one day and NEVER AGAIN, so I suspect they may be back in the future. If not, I’ve been part of an exclusive group of pasty-munchers).

There were other products also new to Currant Affairs:

vegan brownies and cupcakes. I’d been lucky enough to sample the brownies when Karyn was expanding the vegan range for her Chocoholic business, so I went for the cupcake, which was a proper old-school cocoa-rich cake, small but powerful.

I met my friends by the fountain in Town Hall Square. The lights/movements for the storybook tableaux weren’t on yet as the big town lights switch-on is later today, but it was all looking very tidy and ready to go.

There were some nice things at the fair, and I was tempted by some chipotle sauce, as well as some jewellery made from beads that looked like tiny different pieces of fruit, but in the end I escaped spending just £1.50 on one stall and with inspiration for some things I can make myself (don’t worry, I’m not going to rip-off other people’s ideas, it’s just inspiring to see what can be done).

We took a quick walk into the main shopping area and I took advantage of B’s discount card to get 10% off the already very reasonably priced English mustard at Co-op, as well as some emergency baked beans. I also got a couple more clip-lock containers at Poundland as they are a very handy size and not often in stock.

We then went to Morrisons, where I noticed garlic bulbs had gone up from 25p to 30p, so I thought I may as well get the organic two-pack at 60p. I also got a knob of ginger for 7p, which should liven up a meal or two, or maybe some smoothies.

Going into town to a craft and food festival at the market this morning. I only have £6.70ish in credit so I don’t want to be tempted by anyone selling vegan muffins or other sweet goodies, unless they really look too good to miss, so I’ve treated myself to a sweet breakfast already!

3tbs self-raising flour, 3.5 tbs water, 1/2 tbs sugar, pinch of salt and a handful of frozen redcurrants and dried cherries made a single pancake, which I fried in a bit of oil, then drizzled with golden syrup and lime juice. The berries prevented it getting as brown as I would have liked (or possibly my impatience to eat it did that) but I feel like I’ve taken reasonable precautions now against unnecessary spending!

Halfway through the month!

Since I was in credit, and I really fancied some tofu and a looksee at the market to try for cheap bananas, I headed across town after the morning at work. I popped into the Chinese grocery next to the market for calcium-set tofu, £1.30 for 600g, then headed across the road towards the market.

One of the stalls regularly sells organic pointy sweet peppers a few for a pound, and today the bowls were extra large. True, some of them were slightly wizened, so I may have to process them fairly quickly and freeze some, but they’ll add interest to lots of meals!

There’s a stall that sells sweets, crisps and snacks at knock-down prices and they had The Dormen mixed nuts (baked almonds, cashews, macadamias and pistachio nuts) in 130g foil bags, three bags for a pound! True, they were past the sell-by, so I bought a three bags and opened one. Seemed absolutely fine, so I bought another three bags, and will stick most of them in the freezer to be on the safe side. When I came home I checked the normal retail price and they seem to go for over two quid a bag, so I’m very pleased. 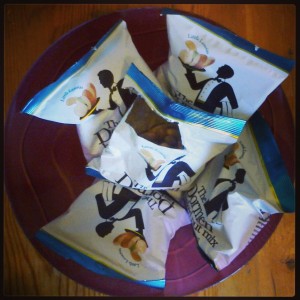 After quailing at the task of making 2 kg of yellow dried split peas taste delicious, I have made a pretty good start and am quite pleased with the results so far.

I soaked about 500g/just over 1lb dried split peas yesterday for a few hours then heated them up to boiling point for a few minutes before following my now routine method for cooking this kind of thing – i.e. putting on a lid, turning off the heat and leaving them to soften using the residual heat. After fifty minutes they were stil quite firm, but I correctly assumed that since they’d either be heated up again, or blended, they were done enough.

I also processed the remains of the first butternut squash as it had been cut open for a few days and I didn’t know how much longer it would last. That was simply cut into slices then peeled with a potato peeler, cut into cubes and added to a pan of sautéed onion with a splash of water and some bouillon powder. I thought this could be used in a few different ways, including maybe a savoury pumpkin-pie-type-thing.

Today’s lunch has been an amalgamation of both of these components. I fried up another onion with a couple of teaspoons of punch pooran spice mix, added half the cooked split peas, water just to cover then brought to the boil with a stock cube. I put my last remaining can of tomatoes in the blender, along with the final red chilli, a clove of garlic, some ginger powder, then I added about 1/3 cup peanuts and half the split-pea mixture, whizzed it all up (had to add some water), returned to the pan, added some diced potatoes, brought back up to simmering point and cooked until the potatoes were done. I didn’t want to add all the squash mix to the soup mix, because there was a large amount of each, and added together would probably be six or more servings, which would get boring after a while, so I just heated up a ladleful of squash mix with a bit of water in a small pan, then added a ladleful of soup to that once the potatoes were done. Garnished with fresh mint from the garden and with some toast on the side, this was a very satisfying and tasty lunch. So, the secret to cooking with split peas seems to be just throw a bunch of highly-flavoured stuff into the pot and keep going until it masks the pea taste! 😉

Spend for the month now stands at £32.46, as I bought a lemon for 25p at the market earlier today. I plan to use this with the rest of the split peas and the last cloves of garlic to make hummus-alike.