I’ve been thinking about potato scones almost since MoFo started, they cover so many things I really like: potatoes, carbs, friedness. Yep, the potato scone has it all.

I found several recipes. The common factor in many seemed to be that the flour weighs about 1/5 of the potato. The simplest instructions were at scottishrecipes.co.uk but to a potato-scone-making novice they left out a few rather important bits of information, like whether to flour your rolling-out surface, or grease your griddle.

I knew I wouldn’t get through 500g of potatoes-worth of scones, so I cut it down to 300g, with a corresponding 60g flour. I peeled and weighed out the potatoes, cut them into fairly small chunks, covered them in cold water in a pan and boiled them until they were soft enough to mash. When they were done I drained the cooking water into a measuring jug, being fearful of the instruction that told me not to let them get too dry.

I mashed the potatoes with a pinch of salt and added them to the flour while they were still warm, and added a glug of olive oil. I cut them in with a fork, and the mixture did look a bit on the dry side: 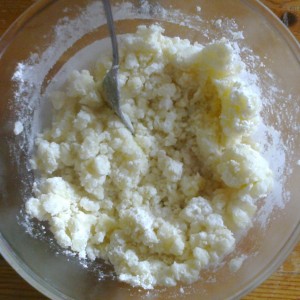 So I added a dribble of the cooking liquid. Not a great idea. It was still a cohesive dough, but definitely on the sticky side. I ploughed on, scooping out half of the mixture and starting to roll it out on my silicone pastry mat. Disaster! (yes, I’m being melodramatic.) The dough stuck to the mat. I scooped it back into the bowl, turned the mat over and floured it, despite lack of instruction to do so, and put a bit of flour on the dough for good measure. This successfully rolled out into a rough circle which I then quartered.

The recipe also doesn’t say to grease the griddle, but I didn’t want to be scraping dough off my recently-re-seasoned cast iron pan, so I poured a good couple of teaspoons of oil in and swirled it around. The seasoning must have taken pretty well this time, because these didn’t stick at all, and in fact came out looking pretty good:

I’m not usually one for a big breakfast, but this is the last Sunday of MoFo, so I decided to treat myself. Beans in tomato sauce (with added chopped onions), mushrooms fried with a bit of oregano and smoked paprika, a tomato cut in half and warmed up in the oven, and some Linda McCartney rosemary and red onion sausages, and the scones as the king of the plate! Jolly good it was too. Since I usually only have cooked breakfasts when I’m on holiday, and because the sun is shining today, it was a great start!

Bit low on veg at the moment, but I still have several avocados left. I’d been thinking about mash since I saw a shepherds pie pizza on the Get Scorned blog – http://comesconewithme.com/2013/09/17/the-art-of-shepherds-pie-pizza-recipe-more-from-the-bake-and-destroy-blogtour/ so it was only a matter of time before I got my spuds out.

Hastily slicing some Lady Balfour into a pan of lightly salted boiling water without bothering to peel them, I impatiently awaited the moment I could crush their gentle spirits, along with a nice ripe avocado, English mustard and a pinch of smoked sea salt.

Once that was taken care of i hastily coated some slices of tofu in Marigold bouillon powder and smoked paprika and while those were pan-frying, sliced up a bit of cabbage and cooked it briefly with a bit of water, dash of cider vinegar and a few drops of soya sauce. 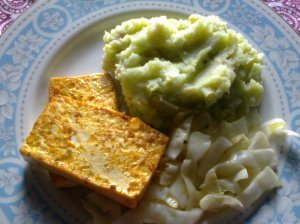 May seem like a strange mix but it certainly hit the spot! I don’t usually add fat to mashed potato, generally liking it just mashed with a bit of the cooking water and some salt, pepper and mustard, but the avocado worked excellently, making this creamy, comforting and subtly tasty.