Going into town to a craft and food festival at the market this morning. I only have £6.70ish in credit so I don’t want to be tempted by anyone selling vegan muffins or other sweet goodies, unless they really look too good to miss, so I’ve treated myself to a sweet breakfast already!

3tbs self-raising flour, 3.5 tbs water, 1/2 tbs sugar, pinch of salt and a handful of frozen redcurrants and dried cherries made a single pancake, which I fried in a bit of oil, then drizzled with golden syrup and lime juice. The berries prevented it getting as brown as I would have liked (or possibly my impatience to eat it did that) but I feel like I’ve taken reasonable precautions now against unnecessary spending! 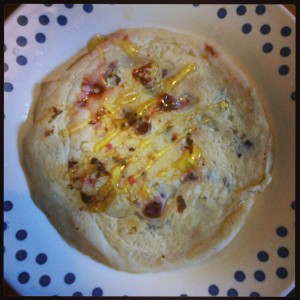 Well, the dinner yesterday was lovely. My clever friends had managed to find packets of ready-made vegan gnocchi at the Co-op, had made a great sauce to go with them, and a very tasty wilted spinach salad.

Some time passed. Cider, wine, sangria, beer and old-fashioned cocktails were consumed (not all by me!), and when we started flagging they offered us the spare bed so we didn’t even have to fork out on a taxi. Very comfy it was, too.

This morning we all felt a little delicate and in need of some fresh air, so I suggested a trip to http://www2.le.ac.uk/institution/botanic-garden to my significant other. What a great start to a Sunday, the gardens were beautiful.

When I got home, something greasy and starchy was definitely in order, so I made a batch of banana drop-scones. I googled around and had a look at a few sites to see how different people make their drop scones (also apparently known as Scotch pancakes, although I think of Scotch pancakes as having sultanas in them, which none of these recipes did), and I ended up loosely basing them on a (non-vegan) recipe over at http://www.be-ro.co.uk/recipe/showrec9.html as it was the simplest and had only one egg originally. Many of the others suggested 2 eggs, and fairly large amounts of raising agents, but I don’t need my food to be fluffy today, I was looking for comforting stodge. As I still have bananas to use up I thought I’d go back to the time-honoured vegan trick of subbing egg for banana, with the bonus of banana-flavoured drop scones sounding rather nice anyway.

1 medium banana (my scales weighed this at 82g)

+ oil or cooking spray for the frying pan.

Ingredients for the redcurrant sauce:

1 tablespoon granulated sugar (this came out very tart, which I thought was a great contrast with the pancakes, but if you don’t like tartness add another spoon or two of sugar).

Mash up banana in a smaller bowl. Add some of the milk to the banana to get it to a sloppy consistency then pour it into the dry ingredients. Add more milk until you get to a thick but droppable consistency. Stir in the oil (or leave it out – the BeRo recipe doesn’t call for fat, but many of the other recipes had butter in them)

Turn on medium heat under a frying pan and add oil or spray with cooking spray (they do brown better with oil, I tried both ways). Leave to heat up for about 20 seconds.

Turn heat down and using a small ladle or a serving spoon, drop spoonfuls onto the pan. They will spread a bit, so leave space between them. Make them whatever size you like but they should be on the small side, I made mine about the size you could eat in 2-3 bites. Cook them for about 3 minutes on one side  – bubbles will start to rise. Mine looked like this just before I turned them over. 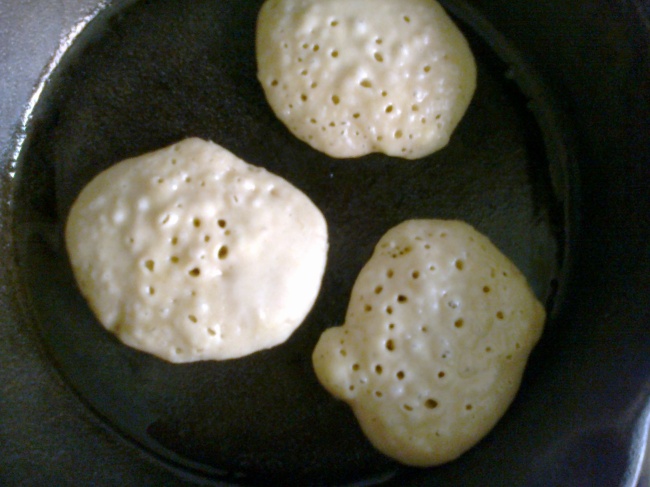 Cook for another minute or two on the other side to brown. Remove from pan and if you want to eat them warm put them on a plate in a low oven while the rest cook.

After tasting the first drop scone I realised they were a bit too sweet for my taste, so I got out some redcurrants I had frozen a few weeks ago after they were given to me from my mum’s allotment.

I put 50g into a small saucpan with a tablespoon of sugar and one of water and boiled that for about 5 minutes to make a jammy sauce. This was nicely tart and played off the sweetness of the drop scones perfectly. Here’s a nice gory shot of the innards for you!