once baked, twice baked (tickle you under there!)

The chickpea tofu and crustless quiche version of same got a second outing in baked form. I’d already baked the quiche-type-thing for a good 35 minutes previously, whereas I left the plain tofu to set in the fridge. In my opinion, twice baking is definitely the way to go. Cubed, tossed in a little soya sauce, cayenne and with a crafty squirt of liquid smoke, then baked for another 20 minutes or so, it was delightfully firm with a bit of chew and a hint of crunch, wheras the single baked stuff was more like baked polenta, where a thin layer of crisp gave way to a softer texture inside. Pleasant enough, especially maybe if served with a ratatouille-type sauce, but not a patch on the twice-baked for eating out of hand.

Just the rest of today and tomorrow to get through in the challenge! Yesterday I was called at lunchtime to see if I’d urgently cover for someone who was off sick at short notice, so I hadn’t bought a packed lunch, and didn’t have much time to get anything. I’d had grain-based cereal for breakfast, so peanuts and some fruit seemed a good choice for lunch, but I was shocked at the rise in price of peanuts! I’m sure the last time I looked they could be had for around 30p per 100g, whereas all but the largest bags I could see at Tesco yesterday were around 50p per 100g. They didn’t have any Basics ones for sale, so that may have been the reason (edited to add that I’ve just looked at their online shopping prices and the Everyday Value ones are actually still only 24p per 100g. Phew! Must just have been in a poorly-stocked or rip-off-y branch!) but in any case I ended up paying £1.86 for food, which left me with just over £2 for the month. When I visited Co-op to look for clothes washing stuff, they had ‘simply value’ fabric softener (which I never use) for 55p, but no equivalent value washing powder or liquid. The cheapest stuff was £2. Seemed odd. 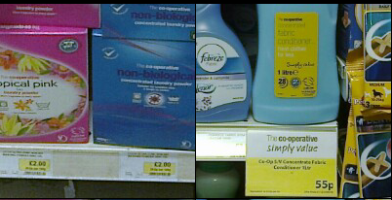 Although I toyed with the idea of trying to just use fabric softener I didn’t think it was worth the risk to spend a quarter of my remaining funds, and I didn’t want to spend all of my money on the powder, so left it. Fortunately I had clean tights, so the no-clean-sock problem isn’t too urgent.

There are still plenty of chickpeas in the 5kg sack I bought back in December, so I’ve been keeping a look out for interesting recipes to use them in. One that continuously cropped up was for something called Burmese tofu, while many more people raved about pudla (kinda Spanish omelette made from chickpea flour with veg in the batter from what I can make out), and then I saw a few recipes combining those into a quiche, notably The Gourmet Vegan’s vegetable quiche which is based on the I-40 kitchen’s quiche idea, which also gives a recipe for the tofu. In the comments on that post, Hilda from Triumph of the Lentil commented that she had been experimenting and reduced the timescale of the original tofu recipe, and since I’m all for less hassle and more delicious food as quickly as possible I decided to try her method, divided in half to make the straight tofu and also a crustless quiche type affair. I made the process even simpler by just combining whole chickpeas with about half the water in my Vitamix, whizzing them on high speed until there was a smooth batter then pouring that straight into the remaining water once it was at a boil.

For the quiche, I chopped up about three red onions and sautéed them with a pinch of Herbamare in a little olive oil until soft, then added that to the remaining chickpea mix after pouring out the plain portion once it had got thick and cooked through. I threw in a pinch of kala namak salt for a whiff of egg (although I was actually never a fan of the egg taste. I bought a huge bag of this salt though, so am trying it out in a few things), then poured the mix into a baking dish I’d greased with a bit of olive oil and smoothed a dribble more oil over the top, then baked it in a medium-hot oven until the top was starting to brown.

I tried some of that warm and thought it very reminiscent of onion quiche of yore (though it’s got to be 17 years or more since I last had eggy quiche, so who knows how accurate my taste recollection is?), but not interesting enough to eat a whole pan of as is, probably mainly because I’d undersalted it, so treated the quiche as a tofu-like/polenta-ish substance as well for my lunch today, sprinkling with salt and pepper, pan-frying in olive oil and serving with the last of the red cabbage which was lightly cooked with half a carrot and a splash of balsamic and just enough water to stop it scorching. 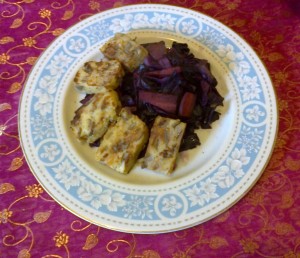 As noted on Triumph of the Lentil, don’t expect this to have the same texture as tofu, although I think the longer process does produce a slightly silkier product. However, this is a tasty protein-rich food which I can see having a lot of applications.

For the remaining three days of the challenge I still have just over £4 left. The cabbage is gone now, so I’m going to see what’s cheap at the market tomorrow. I’ve also got no washing powder left, and am running out of clean socks. I hope I can get some greens and laundry supplies with the remaining funds!